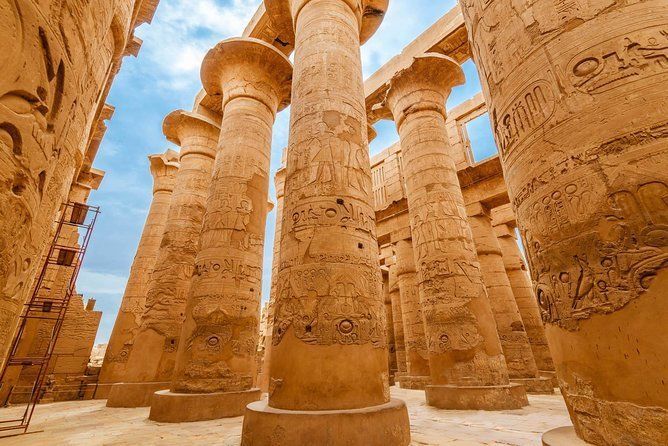 Full Day Tour to East and West Banks of Luxor

Start your full day tour visiting the Highlights of Luxor City where you visit valley of the Kings, the Temple of Queen Hatshepsut, also known as El Dir El Bahari and Colossi Of Memnon. Lunch is included and then continue to the East Bank where you Visit Luxor and Karnak Temples. At the end of the tour you will be transferred back to your Hotel, Nile Cruise or to Luxor airport.

Start your full day tour visiting the Highlights of Luxor City where you visit valley of the Kings, the Temple of Queen Hatshepsut, also known as El Dir El Bahari and Colossi Of Memnon. Lunch is included and then continue to the East Bank where you Visit Luxor and Karnak Temples. At the end of the tour you will be transferred back to your Hotel, Nile Cruise or to Luxor airport.

Full Day Tour to East and West Banks of Luxor

the Temple Of Luxor, it was built by Amunhotep III in 18th Dynasty in the New Kingdom and it was completed by Ramses' II during the 19th Dynasty.

the Temple of Queen Hatshepsut that known as El Dir El Bahari which was built by Queen Hatshepsut the daughter of Thutmosis I, who ruled Egypt about 20 years during the 18th Dynasty (approximately 1490-1469 B.C), the only pharaonic woman who reigned ancient Egypt.

the Valley Of The Kings, the magnificence of the grandeur of architecture which was used for burial, there are many kings buried in this valley.

Karnak Temple, the greatest example of worship in the history, dedicated to the God Amon, his wife Mut and their son Khonsu.

The Colossi of Memnon which is remains of the mortuary temple of Amenhotep III.

Optional Visit Requires additional ticket can be bought on spot

Confirmation will be received at time of booking.
Children must be accompanied by an adult.
Not wheelchair accessible.
Near public transportation.
Most travelers can participate

It was a good tour with Fawakeh- she is knowledgeable, friendly for what she's working and also good lunch. But I hope they need to write down the extra itinerary which is going the place we didn't plan. That's a shop selling good stuffs but again, that made us uncomfortable. It's like a tourist trap cause I know how that work out for us. They mean no harm but it will be better if you ask us do we want to go there or not? We like the shop and the owner but this should be changed.

Yolanda was very personable, knowledgeable and her english was very good. We will be coming back and hopefully she will still be doing tours.

This tour of the East and West banks of Luxor was very well done. I spent the day with Fawakeh and the time flew by. The sites themselves are very impressive, but what was equally impressive was her knowledge of subject matter on the tour and all other information Ancient Egyptian related. I learned some things I did not know before. The duration of my tour went a bit longer than anticipated I believe, but it was no problem as Fawakeh and her driver were very accommodating to anything I requested and provided excellent hospitality. If you want to see the best of what Luxor has to offer, this tour is a safe bet. Highly recommended. Job well done! Shokran for a lovely day!

My Dad and I would like to thank Yolanda for such a great experience. She had the upmost knowledge of every attraction we went to. Gave us great tips when interacting with locals she translated for us when needed. Most importantly she was kind and patient with us. And the restaurant they took us too for lunch was top notch (try the lentil soup) we had a great time with both her and the driver Amr. 10/10 would recommend.

We loved Luxor. Luxor is clean and laid back. Our tour guide was great. The driver and the tour guide picked us up at the airport earlier than the set tour time. We arrived early with our flight from Cairo. Our tour guide was knowledgeable, friendly, and accommodating. We had a comfortable ride too. It was amazing to see this part of Egypt, the Ramseys tombs with the original stone wall carvings and colors, and the temples. Our lunch was tasty and a good size portion.

My tour guide was Salwa was amazing! She was very knowledgeable. She was willing to take her time to help explain the history and monuments. It has always been a dream to visit Egypt to see these amazing monuments and tombs. This tour help me do just that. Thanks Salwa/Emo tours. Very highly recommended.

Salwa was a very knowledgeable and helpful guide both during the tour and after. We loved seeing and hearing the history of upper Egypt. The Luxor Temple, Valley of the Kings, and Karnak Temple are must see's while in Luxor. Salwa helped us to find and book train tickets back to Cairo and took the other half of our party to the airport as well. She was very accommodating of our schedule and needs as we were visiting in high summer. She kept us hydrated and cool. Thank you, I wouldn't hesitate to book again.

That was a great experience to explore ancient Egypt with Shrehan Yousef Alhagagi. Thanks to her for her patience!

It is a great day with my great experience as an only tourist for the tour. The weather is great. Antonio is a great guide for the tour and he explained the history and their symbolic sculptures and carving in a great depth at each site during the tour. He seems to have a bold knowledge in archeology at Luxor. He suggested I taste the local sugarcane juice and bought me a cup of freshly-made sugarcane juice from a street-side shop, which tastes really great! Well done! Antonio.

We started out going to the colossi of Memnon and then on to the valley of the Kings, going into the tombs of Tutankhamun, Merenptah, one of the Rameses and one more pharaoh sorry, didn't think about writing down the names at the time. The tomb of Tutankhamun was smaller than I expected, which is also naturally explained by the fact that the tombs were constructed during the reign of the king, so the longer the reign the bigger the tomb. I think I wouldn't go into Tut's tomb if I came back, but I don't regret that I did it. I found the other tombs included in the entry-ticket more interesting though. Then we went on to the mortuary temple of Hatshepsut which for me was the highlight of the west bank. After this we headed over to Karnak which was the highlight of the whole day for me, and then on to the Luxor temple which is very similar in style to Karnak. Our guide Marianne was very flexible, friendly and could answer all of our questions very well, and we even managed to fit some extra activities into our schedule. I highly recommend this trip for those short on time, but if I had a day extra I think I would have preferred to divide it into one day for the west bank and one day for the east bank, since I felt the time on the west side of the Nile was a little short and there were more ancient remains I had read about that I would have liked to see obviously prioritizing Karnak and the Luxor temple was still the right thing to do.

An excellent tour which allowed me to see key sights such as the Valley of the Kings, Hatshepsut memorial temple, Karnak temple and Luxor temple in one day. Ismail was a superb guide: gave me a great introduction to ancient Egypt, answered all my questions and took photos for me much appreciated as I was travelling on my own. I didn't feel at all rushed and also had time to wander around by myself after his explanations. Actually seeing the Valley of the Kings and the tombs was a highlight - made all those years of reading about it come to life! My husband was unexpectedly able to join us in the afternoon and I really appreciated the flexibility Ismail and the company showed so that we could alter the itinerary and pick him up. However, this was also an excellent option for solo travellers - safe, reliable, and pick ups, meals etc were all as planned. The professionalism and knowledge of my guide were outstanding and this was a great way to see Luxor.

Awesome tourguide - could not do enough. Will highly reccommend Emo tours in Egypt - they are awesome, in Luxor as well as in Cairo.

We joined one day private tour managed by Emo tours, with great guide named Mrs Nermeen. Thats really great memory and good time. She is really friendly, kindness, and great fluently English. Also great knowledge and experience as guide. its really easy understand to know about each tourist places. we are completely happy to spend day, and great delicious lunch with her.
Regarding of temperature, its quite crazy hot, but she always take care for us. we appreciate to her in the tour.

Its a wonderful experience.