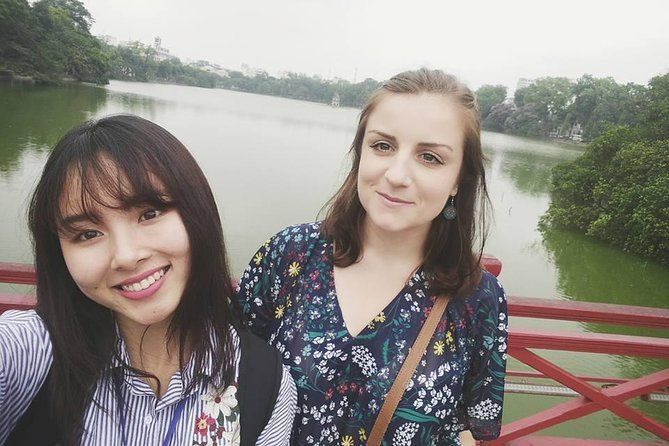 We are AZ Local Trip NPO Team, a non-profit organisation by local university students, who have been living in our beloved-city, Hanoi for years. We would love to show you the best of Hanoi, including the hidden places, best foods and interesting life stories.

--------------
Remember, we are just local guides. We know Hanoi, and would love to show you with the best as we can.
Dont expect a lot, but for sure, it will be one of the most memorable you would do in Hanoi.

We are AZ Local Trip NPO Team, a non-profit organisation by local university students, who have been living in our beloved-city, Hanoi for years. We would love to show you the best of Hanoi, including the hidden places, best foods and interesting life stories.

--------------
Remember, we are just local guides. We know Hanoi, and would love to show you with the best as we can.
Dont expect a lot, but for sure, it will be one of the most memorable you would do in Hanoi.

Our tour guide will pick you up then we will start our Hanoi Old Quarter Walking Tour. The first destination of the tour will stop by Hoan Kiem Lake, considered the heart of Hanoi. You can observe many locals doing morning exercises or taking part in interesting activities such as cycling and playing badminton.

Hoan Kiem Lake is in the historical center of Hanoi. According to the legend, Emperor Le Loi was boating on the lake when a Golden Turtle God (Kim Qui) surfaced and asked for his magic sword, Heaven's Will. Loi concluded that Kim Qui had come to reclaim the sword that it’s master, the Dragon King (Long Vuong) had given Loi some time earlier, during his revolt against the Chinese Ming Dynasty. Loi renamed the lake to commemorate this event. He renamed the lake from Luc Thuy (Green Water") to Hoan Kiem Lake (Lake of the Restored Sword). The Turtle Tower (Thap Rua) standing on a small island near the centre of lake is linked to the legend.

Dong Xuan Market is placed in the Old Quarter - It’s known as Hanoi’s largest indoor market, offering a wide range of goods such as fresh produce, souvenirs, accessories and clothing, as well as electronic and household appliances.

Bach Ma Temple is believed to be the oldest temple in Hanoi. This Buddhist temple was originally built in the ninth century by King Ly Thai To in honour of Bach Ma. According to a sign inside the temple, originally the site of the temple was Long Do Mountain. The temple was moved to its current location in the Old Quarter of Hanoi in the 18th century, during the Ly Dynasty, to guard the east side of Thang Long.

Then, we head to Ancient House. Situated at a tranquil street near Silver Street, Ancient House appeals plenty of tourists by its ancient but sophisticated charm of a Vietnamese traditional house.

The Long Bien bridge across the Red River connects Hanoi with the main port of Haiphong. Designed by Gustave Eiffel, the bridge sustained significant damage during the Vietnam War. Only half of the bridge retains its original shape, but a rebuilding project supported by the French government is currently in progress to restore the bridge to its original appearance.

Hanoi Train Street is a residential street in Hanoi, Vietnam that a speeding train passes straight through twice a day.

Our tour will continue with Train Street. The street is so narrow that all residents must ensure their bikes and precious personal belongings, as well as their roaming children, are all safely inside the house before the train passes.

Our tour will continue with Hanoi Old Quarter with 36 bustling streets. Wandering around the narrow alleys of Hanoi Old Quarter, tourists can see many ancient houses preserving their original charm since 19th century.

Enjoy a cup of egg coffee, a specialty of Hanoi. Egg coffee is a perfect combination of dark coffee and fat egg.

Next, we are on the way to Quan De Temple, where to be dedicated to Quan De, a famous Chinese general. Our walking tour will end at Bach Ma Temple, a famous Buddhist temple in Hanoi. It sounds interesting to hear many amazing stories in relation to the origin of Bach Ma Temple.

Visiting Vietnam without listening to a rhythm of ca tru traditional music means that you've not discovered the real spirit of Vietnam yet." "Free yourself and get immersed in ca tru while enjoying performance by Thang Long Ca Tru Theatre. It is a voluntary, non-profit group of ca tru musicians founded in 2006. Long-time history, unique instruments, impressive music tones and meaningful song lyrics made ca tru recognized by UNESCO as the World Intangible Cutural Heritage."

Depending on the time you book, we will send you details of where to watch the water puppet show

Depending on the time you book, we will send you details of where to watch the water puppet show

Confirmation will be received at time of booking.
Not wheelchair accessible.
Stroller accessible.
Service animals allowed.
Near public transportation.
Most travelers can participate.
This experience requires good weather. If it’s canceled due to poor weather, you’ll be offered a different date or a full refund.
This is a private tour/activity. Only your group will participate

The student doesn’t know much facts, can not blame them. They can only do what they have been taught.

Crystal and Harvey treated our family including 2 tertiary students to a wonderful, informative day out. They both had a fabulous knowledge of history and Harvey's charisma and Crystal's professionalism made for a sensational day.

We waited for our tour guide at the lobby of our hotel last May 10, 2019 at 8:30 AM but he/she didn't show up. We called the local tour operator, AZ Local Trip, and was told that the tour guide wasn't available that morning and offered that the tour be rescheduled the following day. We accepted and waited for the tour guide at the hotel lobby on May 11, 2019 at 2:30 PM but again he/she didn't show up. Viator, please return our payment.