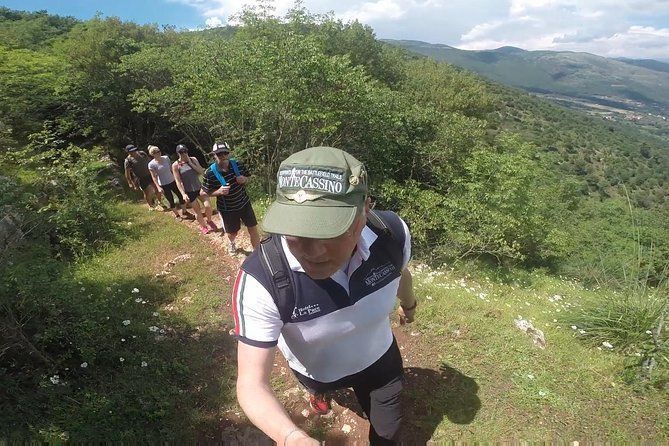 Footprints on the Battlefield Trails of Monte Cassino

Monte Cassino battlefield private walks, through mule tracks and storytelling to arrive on the top of the impregnable hills defending Monte Cassino Abbey and the Gustav Line in WWII, discovering the bloody footprints of the soldiers and the hardships of the civilian escape.

Monte Cassino battlefield private walks, through mule tracks and storytelling to arrive on the top of the impregnable hills defending Monte Cassino Abbey and the Gustav Line in WWII, discovering the bloody footprints of the soldiers and the hardships of the civilian escape.

Footprints on the Battlefield Trails of Monte Cassino

The Abbey of Montecassino is one of the most known Abbeys in the world.
In 529 Saint Benedict chose this mountain to build a monastery that would host him and those monks following him on the way from Subiaco. Paganism was still present here, but he managed to turn the place into a well-structured Christian monastery where everybody could have the dignity they deserved through praying and working.
Within the centuries the Abbey has met magnificence and destruction many times, and has always come out of its ruins stronger. In 577 Langobards destroyed it, then Saracens in 887. In 1349 a violent earthquake occurred and in February 1944 a bombardment almost flatted it.

Confirmation will be received at time of booking.
A moderate amount of uneven surface and steep walking is involved.
This tour requires a minimum of 2 people per booking.
Not recommended for participants with heart or other serious medical conditions.
This experience requires good weather. If it’s canceled due to poor weather, you’ll be offered a different date or a full refund.
This is a private tour/activity. Only your group will participate

Our tour was excellent. Pino, our guide, was extremely knowledgeable and passionate about the Battle of Monte Cassino. During our hike, he showed us maps and photos on his iPad and clearly explained the positions and movements of both the allied and axis troops. The pace of the climb was not too challenging. The experience was respectful and very moving. Reaching the summit of Hill 593 was a highlight for my husband. We would highly recommend this tour. Thank you Pino!

The tour with Pino was a definite highlight of our trip to Italy. He is extremely knowledgable, kind and passionate about sharing his impressive expertise regarding the WWII battles that were fought in the Cassino area. Pino does not simply share facts about the various battles fought. He imparts upon visitors a greater sense of the impact of war for all parties involved. He also emphasizes the importance of remembering and paying tribute to the many soldiers who fought in these battles. Pino made the tour a very moving experience and has sparked our desire to learn even more about WWII. He was also very generous with his time, and spent much longer with us than merely a few hours. His breadth of knowledge is impressive and inspiring. Walking along the Cavendish trail in the very footsteps soldiers took not so long ago is a unique opportunity, and one that when accompanied by Pinos storytelling and guidance, will prove unforgettable. I would highly recommend this tour if you are in the Cassino area!

It was beyond amazing. We were told that it couldn't happen because of the weather but then they gave us a private tour for the same price. My grandfather fought of the battlefields and they took the time to do research on him and brought me literally in his footsteps. I highly recommend!

Pino was a great tour guide and took us on a wonderful tour of the battlefield at Monte Cassino. My partner and I share an interest in the second world war and Pino was able to much of the historical accounts which we had read from books into perspective while on the trail. The price of the tour, when compared to other tours, is quite affordable. His passion for the subject is palpable and when you walk into the hotel, where you will meet Pino, there are many relics of the battle including a guest book which holds some very touching personal accounts. From the hotel, Pino drove us to the trailhead which would have been a hard find without him as the trail is not well marked from the city centre. Overall, this was a great tour and well worth a stop in Cassino.