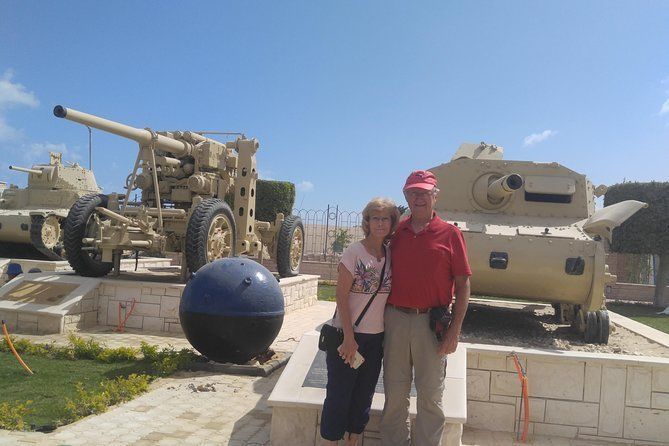 "Al-Alamein Museum is a complete illustration of the story of World War II in North Africa, containing records of all the events. Even before entering the Museum proper, in the garden, there are huge army tanks and various larger weapons. A visitor can view this heavy equipment from World War II, go inside a tank or an army car, or even jump up and sit on a top of a tank. The garden has about fifteen large pieces used by different forces in the Battle of Al-Alamein.
Inside the museum there are five halls, each of them is dedicated to one of the four countries involved in the war, including Great Britain, Italy, Germany, and Egypt . The museum also has a mixed hall that contains items from the war generally."

This pivotal location in World War II is west of Alexandria in the desert along the Mediterranean coast near Marsa Matruh. The events here actually took place in two stages. An initial conflict in July 1942 resulted in a stalemate that halted the German advance. Three months later the strengthened Allied force under a new commander, General Montgomery, fought the German forces for 13 days before finally forcing them to retreat. The end of this battle on October 20th, 1942 is being celebrated this year.
Today the battleground is memorialized by a museum containing equipment from the battles and explanation of what took place, as well as several cemeteries where the fallen soldiers who fought on both sides of the battle are buried. Taking the short trip out of Alexandria to experience the solemn beauty of these cemeteries and learn about the history of World War II in North Africa is a memorable trip at any time, but this October is will be even more special.
Young men from Germany, Italy, Australia, Great Britain, France, New Zealand, India, South Africa, and Greece all fought and died on these grounds.

Confirmation will be received at time of booking.
Children must be accompanied by an adult.
Wheelchair accessible.
Transportation is wheelchair accessible.
Most travelers can participate.
This is a private tour/activity. Only your group will participate.
Face masks required for travelers in public areas.
Face masks required for guides in public areas.
Social distancing enforced throughout experience.
Hand sanitizer available to travelers and staff.
Face masks provided for travelers.
Regularly sanitized high-traffic areas