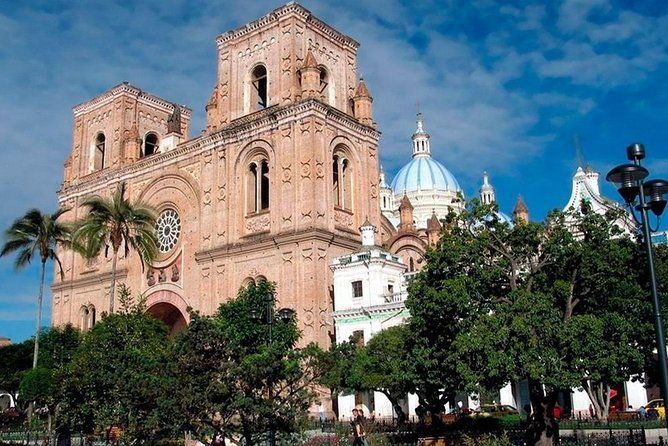 Come and experience Cuenca, the 'Athens of Ecuador' on this 4-hour city tour! See all the highlights of this city, including the Old and New Cathedrals, Calderon Park, and more. Learn about the culture, history and architecture of this UNESCO-World Heritage city from your knowledgeable guide as you travel around the city by coach.

Come and experience Cuenca, the 'Athens of Ecuador' on this 4-hour city tour! See all the highlights of this city, including the Old and New Cathedrals, Calderon Park, and more. Learn about the culture, history and architecture of this UNESCO-World Heritage city from your knowledgeable guide as you travel around the city by coach.

It contains around 120 architectural structures, protected as assets of the city. It is the most important symbolic environment of the city. The formal, natural and cultural, visual and functional elements are confused in a unity of act, in a kind of urban melting pot of profound collective significance.

Located in the Historic Center of Cuenca, where around 25 vendors of flowers and plants, are placed with tents to sell all kinds of flowers, so it has become a tourist and traditional place for Cuenca.

Most representative religious symbol of the city. Its location responds to the condition of centrality and religious power, in front of the central square, occupying half of the block located on the western side. Its volume, texture and color can be seen from all angles of Cuenca, including the surroundings. Its facade is made of stone and local marble, while the floor is covered with pink marbles, imported from Carrara (Italy).

Panama Hat factory were you will to observe the complete process of manufacturing of the Panama hat which is undoubtedly most important to our country.

Located at the Turi zone in the south of the city. It is a natural viewpoint that offers a spectacular view of the city of Cuenca.

Confirmation will be received at time of booking.
Not wheelchair accessible.
Near public transportation.
Infants must sit on laps.
Most travelers can participate.
This tour/activity will have a maximum of 15 travelers.
Face masks required for travelers in public areas.
Face masks required for guides in public areas.
Hand sanitizer available to travelers and staff.
Social distancing enforced throughout experience.
Regularly sanitized high-traffic areas.
Gear/equipment sanitized between use.
Transportation vehicles regularly sanitized.
Guides required to regularly wash hands.
Regular temperature checks for staff.
Temperature checks for travelers upon arrival.
Contactless payments for gratuities and add-ons.
• The activities will not exceed 6 people per group. • The capacity of the means of transport will be reduced to 25% of their maximum capacity. • In the monuments, museums or attractions, the capacity will be reduced to 30% of its maximum capacity.

A terrific tour of Cuenca.....I had tour guide, Fabliano all to myself and he was the best.....shared so much history and answered all my questions.....loved it!

Very good. Luis was informed on all subjects and seemed to enjoy showing us around.

Our tour guide was awesome. My husband and I were the only 2 English speakers in a group of 10. The guide made sure to interpret for us frequently. At not time did we feel left out or like we were missing out on any information. This required a lot of work on a guides part to keep us in the loop. The tour was well organized and moved at a good pace. Our 2nd Viator tour and thoroughly pleased again. (our first was in Munich, Germany) We will be sure to make you a part of our next trip abroad.

There were three of is altogether on the tour. Juan is an excellent guide. He is energetic and knowledgeable and very polite. We started the tour walking to various churches and markets and land,arks in town. He gave a detailed and lively description of each. We climbed the New Cathedral tower and he was very respectful of my age and needing a catch my breath break. We got in the car and drove to the outlook for photos, the Panama hat factory and I asked for a stop at a ceramic studio which we did. I highly recommend this tour

Xavier was excellent with great insights of the area, history and architecture. I enjoyed the small group we were with and the interactions of everyone was delightful and enjoyable.

Juan was our guide and we really enjoyed the walking tour through the old city. He provided a very good history, and a nice overview. Juan was engaging, intelligent, interested in sharing his knowledge and hearing our thoughts and ideas. It was one of the best city tours we've taken. Definitely worth the price and the time.