Enjoy this bike tour of Barcelona, which will take you on a journey through time and introduce you the following (and many more): Old Town, Raval neighbourhood, Passeig de Gràcia and the Modernism, Vila Olímpica, Barceloneta, Arch of Triumph, The Port Vell & The Sagrada Familia. You can have a say in the structure of the itinerary.

Enjoy this bike tour of Barcelona, which will take you on a journey through time and introduce you the following (and many more): Old Town, Raval neighbourhood, Passeig de Gràcia and the Modernism, Vila Olímpica, Barceloneta, Arch of Triumph, The Port Vell & The Sagrada Familia. You can have a say in the structure of the itinerary. 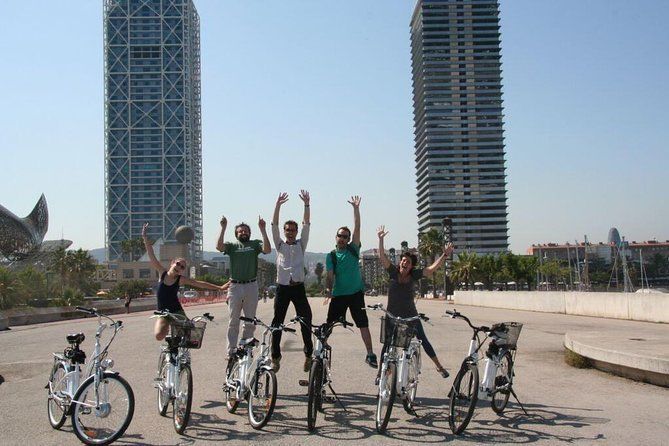 Meet your guide on Plaça Reial, in the middle of tha square, at the fountain. Get ready to experience the city in a different way. Thanks to the bikes, you will be able to reach places that cars or busses can't access. Because our routes follow bike lanes and avoid traffic where possible, your group will enjoy a sense of security and we encourage travelers of all ages to join.

Our expert guide will lead your group through the network of cycle paths that extends into every nook and cranny of the city, allowing you to visit the hidden corners only known by locals. Along the way, you will make several stops to hear fascinating stories from our guide, who will explain each site and what happened there. Don’t forget to bring a camera and capture memories of this spectacular day in Barcelona!

You will start the tour in the Gothic Quarter, which is the oldest part of the city, dating back 2000 years. The distric has many streets, so small, that most of them are closed to traffic. In Ciutat Vella, where the history of Barcelona first started, you will experience a harmonious mix of modernity with Roman and medieval imprints. You will learn about the Catalan traditions and Barcelona’s origins, while exploring the enchanting corners, picturesque squares and the narrow alleys of the Gothic quarter.

After checking out the neighborhood’s most important highlights, we will set our focus on Modernism, crossing the Eixample district and marveling at its iconic Modernist architecture. L'Eixample was designed by Ildefons Cerdà after 1895 , to expand the city. (The word “Eixample” actually means “expansion” in Catalan).

Crossing the streets of this elegant neighborhood, you will remark that Cerdà’s idea of urban planning was revolutionary and utopian.

This was Barcelona´s 19th-century answer to the overcrowding of the medieval city and Gaudi´s favorite neighborhood to work in. In Eixample, you will pass by some of his most spectacular works, including UNESCO World Heritage Sites like Casa Batlló and Casa Milà.

The avenue is home to the most remarkable façades of modernist buildings, including Gaudi’s La Pedrera, Casa Batlló and Domènech's Casa Lleó - Morera or Casa Ametller. While passing by, get amazed by these beautiful houses, that will color in your day.

Of course, we will also take you to the breathtaking Sagrada Familia. Gaudi's masterpiece is considered as the most emblematic landmark of Barcelona. We will make a stop so you can enjoy and marvel the various fascinating details on the façade of this divine work of art.

When you will enter the Raval, the former red light district of the city, your private guide will explain its colorful history and point out some of its most emblematic landmarks.

For centuries now, this part of Barcelona has been home to many nightclubs, cabarets and taverns. Raval is known as the place where sailors would often go to have fun after reaching the local port.

Today, the neigborhood, is a youthfull and sparkling place full of life and movement. Home to skaters and youngsters, boutiques, bars and restaurants.

This bike tour will end at the Barceloneta beach, where the historical district meets the Mediterranean Sea. This was once a fisherman’s neighborhood and still preserves that small-town essence today. Here, you will find lovely chiringuitos (beach bars), authentic Spanish seafood restaurants and colorful buildings with a great local feel.

you will have the chance to marvel at amazing views over the Mediterranean. Take a moment to enjoy the fresh breeze as you peddle along the beautiful seafront promenade.

Confirmation will be received at time of booking.
Minimum age is 10 years old.
You must be able to ride on unpaved or uneven terrain..
Comfortable clothing and shoes.
Not wheelchair accessible.
Near public transportation.
Not recommended for travelers with back problems.
Not recommended for pregnant travelers.
No heart problems or other serious medical conditions.
Most travelers can participate.
This tour/activity will have a maximum of 12 travelers.
Face masks required for guides in public areas.
Face masks provided for travelers.
Hand sanitizer available to travelers and staff.
Social distancing enforced throughout experience.
Regularly sanitized high-traffic areas.
Gear/equipment sanitized between use.
Guides required to regularly wash hands.
Regular temperature checks for staff.
Temperature checks for travelers upon arrival.
Paid stay-at-home policy for staff with symptoms.
In order to guarantee the safety of both the visitors and the team, In-Out has adapted all the hygiene and safety protocols in accordance with the requirements set by the competent and valid organizations and authorities at each stage.

We thought we knew Barcelona but this tour gave us amazing insights and was super fun. Thank you Victor.