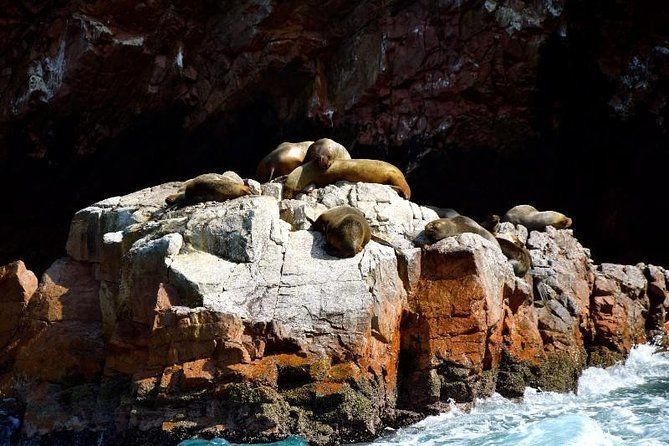 As you cruise west from the tiny beach town of Paracas, you won't be able to miss the Candelabra geoglyph, a 150m high and 50m wide figure of a candlestick etched into the mountain, rumored to have been an ancient guide for sailors or a connection to the Nazca lines. A short description and time for photos is given before cruising on to the famous Ballestas Islands.

Ballestas islands is an excellent opportunity to see large families of over 100 sea lions sleeping on the shores, basking in the sun on the rocks or some barking loudly in efforts to protect their territory. Spot cormorants, the Peruvian booby and Peruvian pelican as well as other impressive varieties of sea bird species and Humboldt penguins nesting together in small groups. Feeling lucky? Watch the waters for dolphins.

Apart from the abundant marine and bird life found here, the Ballestas Islands are also very well known for the guano (seabird droppings) deposited on the island over thousands of years which creates a natural reserve of nitrogen-rich fertilizer over 50 meters deep in some areas. The guano came to be Peru's #1 export in the mid-19th century however today the extraction of guano has been regulated to every 10 years.

The return trip to Paracas is a quick, very windy, direct boat ride to the dock. You should have some time to take photos of the friendly pelicans that hang out on the shore line beside the dock, do some souvenir shopping or grab a snack before heading on to your next destination.

Confirmation will be received at time of booking.
Make sure you bring adequate clothing to keep you protected from the cool ocean air, the sun and spray from the sea..
Bring a pair of binoculars to get a closer look at the birds and sea lions..
If you are prone to motion sickness, you should take medication about a half-hour before you board

Absolutely worth it. The tour was very well organized and the boat ride was great. The islands itself are awesome and much better that the term Galapagos for the poor. I would go again. Highly recommended.

The trip was wonderful!

It was good, but not outstanding. The guide's english could have been better.

The people who organised the tour were quite rude and very disorganised.