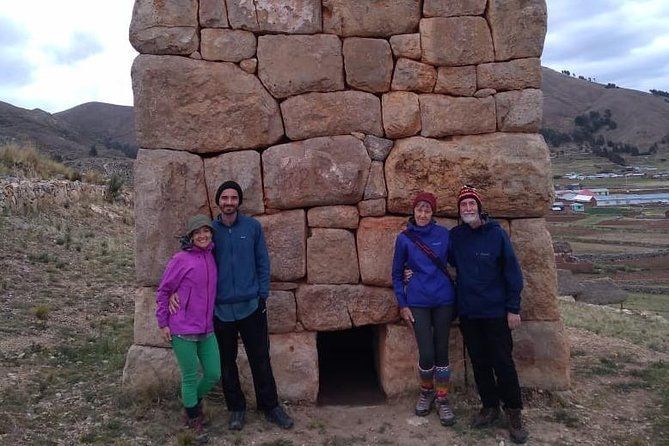 from the city of Puno.

Everything is planned in detail for each visit in the archaeological sites and temples. The tour ends at 6:00 p.m.

from the city of Puno.

Everything is planned in detail for each visit in the archaeological sites and temples. The tour ends at 6:00 p.m.

I start the tour 7:45 am going to pick up the tourists from their hotels in the center of the city, departure from the city at 8:00 a.m.

9:20 AM ARAMU MURO: The first stop will be in Aramu Muro Also known as Wilca Uta, or door of the devil said place is located 1 hour and 20 minutes from the city of Puno by the central road that connects with Bolivia. Aramu muro is a rock where a door is carved in low relief, where you can find many legends. One of them says that Aramu muro (god in pre-Inca times) would have disappeared in this door carved in the stone (Jayu Marka = city of the spirits) taking a solar disc of the Lemurias so as not to be stolen by the conquerors.

This place is mysterious, the local population says that there are spirits hanging around that door and the area is an energetic place also not very visited by travelers.

11.30 AM CHULLPAS VISIT OF ACORA MOLLOCO: After our visit in Amaru muro we will travel to the chullpas of Molloco, which is located south of the city of Puno, in Acora, which is a pre-Inca settlement of the Lupaka culture where through the recent findings made by the archaeologists of the

Ministry of Culture Puno, evidence the strong contact and fusion of the cultures Inca and Lupaka being this not very crowded, in the place we can appreciate funerary towers of quadrangular and circular type as niches or underground tombs which have nothing to envy to the chullpas of Sillustani.

13:00 PM VISIT OF CHUCUITO AND TEMPLE OF THE FERTILITY: Our first stop will be in the city of Chucuito considered as the city of the real boxes, there will be a brief stop in its main square that is located 18 km a trip of 20 minutes south of the city of Puno, where you can see a solar clock made of alabaster stone dating from 1610, rebuilt in 1825 and its church with characteristic arches from the colonial period, after which you will visit the famous temple of fertility called "inka uyu" (pre-Inca period) to get to know the architectural characteristic of Lupaca and the origins of the Qhapaq culture that gave birth to the Incas.

3:00 PM SILLUSTANI Arrival at Sillustani archaeological site of great importance for Puno which is a cemetery that was built in the 12th century by a civilization that occupied the area before the Inca domain. The creators of the imposing funeral towers are known as the Kolla culture.

17:45 pm Visitors are left in their hotels in the center of Puno.

END OF OUR SERVICES

Confirmation will be received at time of booking.
Not wheelchair accessible.
This tour/activity will have a maximum of 20 travelers

Route of the Sun Cusco and Puno Full Day