Take an excursion to visit two of Spain’s oldest cities on a full-day coach trip from Madrid. Avila and Segovia are known as Spain’s “Heritage of Mankind” cities, rich in history and featuring centuries-old monuments.

Take an excursion to visit two of Spain’s oldest cities on a full-day coach trip from Madrid. Avila and Segovia are known as Spain’s “Heritage of Mankind” cities, rich in history and featuring centuries-old monuments. 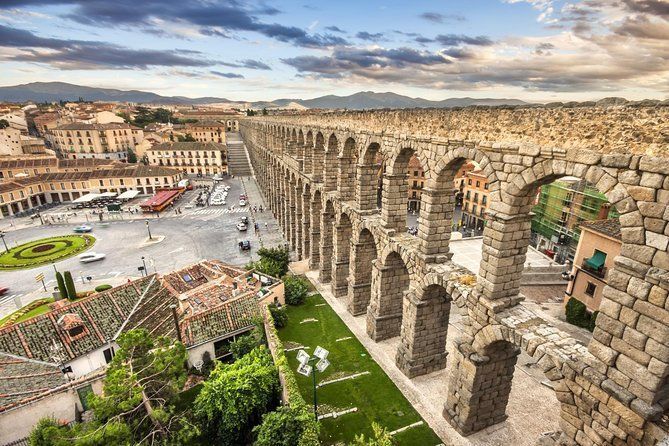 The Walls of Ávila in central Spain, completed between the 11th and 14th centuries, are the city of Ávila's principal historic feature. These fortifications are the most complete in all of Spain.

The Cathedral of Ávila is a Catholic church in Ávila in the south of Old Castile, Spain. It is in the Romanesque and Gothic architectural traditions. It was planned as a cathedral-fortress, its apse being one of the turrets of the city walls

The Basilica de los Santos Hermanos Mártires, Vicente, Sabina y Cristeta, best known as Basilica de San Vicente, is a church in Ávila, Spain. It is one of the best examples of Romanesque architecture in the country.

The Iglesia-convento de Santa Teresa is a church and convent located in Ávila, Spain. It was built by the Order of Discalced Carmelites in the 17th century, supposedly on the site where Saint Teresa of Ávila was born

The Aqueduct of Segovia is a Roman aqueduct in Segovia, Spain. It is one of the best-preserved elevated Roman aqueducts and the foremost symbol of Segovia, as evidenced by its presence on the city's coat of arms

Segovia Cathedral is the Gothic-style Roman Catholic cathedral located in the main square of the city of Segovia, in the community of Castile-Leon, Spain. The church, dedicated to the Virgin Mary, was built in a Gothic style in the mid-16th century.

The Alcázar of Segovia is a medieval alcázar located in the city of Segovia, a World Heritage Site by UNESCO. Rising out on a rocky crag above the confluence of two rivers near the Guadarrama mountains, it is one of the most distinctive castle-palaces in Spain by virtue of its shape – like the bow of a ship

Confirmation will be received at time of booking.
Not wheelchair accessible.
May be operated by a multi-lingual guide.
Stroller accessible.
Near public transportation.
Infant seats available.
Most travelers can participate.
The use of facemasks during the tour is mandatory. Should you forget, we offer the possibility of adquiring one at the price of 1€.
This experience requires good weather. If it’s canceled due to poor weather, you’ll be offered a different date or a full refund.
This tour/activity will have a maximum of 50 travelers.
Face masks required for travelers in public areas.
Social distancing enforced throughout experience.
Transportation vehicles regularly sanitized

Great tour with a well informed guide. Aside from what other reviewers have written, I'd emphasize to check the weather for both cities and dress appropriately. It was significantly colder (and even snowing!) than in Madrid. Err on the side of dressing too warm and dry ... you can always leave things on the bus.

Great trip - fantastic places and must see. Great guide very informative and very knowledgable - enough time in both cities so you get the chance to properly see them

Beautiful scenery, well organized and timed. My family and I enjoyed this tour and made it easy to navigate. Our tour guide was communicative and kind.

Great tour of Sekovia and Avila, especially those interested in architecture. Arantxa was incredibly nice and informative. She spoke Spanish and English very well. Highly recommend

nice and fun for a full day tour in Avila and Segovia. Highly recommended for couples and family.. :)

Excellent!!! Arrantxa who was a guide and host for tour done an excellent job. It is a tour that you should take if you visiting Madrid.

Our guide Arantxa was fantastic! She was very knowledgeable and fun. It was very cold in mid-November, bring warm clothes!

It was an amazing trip!!! 100% worth it!! We have learnt so much, our tour guide made it super interesting.

It was a very enjoyable tour. The guides: Pilar and Diego were very friendly and knowledgeable. They constantly made recommendations . You can tell they are tourist professionals!

The overall experience has been great. Pila is very professional and took good care of everyone. We got to learn many background and small stories that we wouldn't know by exploring the cities on our own. It's a big group of 60 people and they divided them into two smaller groups with one guide each (English group and Spanish group). This improved the eficiency significantly. The audio guide they distributed to everyone was also very helpful. My only minor comment is lack of WiFi on the bus as promised.

Our favourite part of the trip was the Alcazar in Segovia (it is a gorgeous castle with a beautiful mix of architecture). Both cities of Avila and Segovia are splendid. The guide, Pilar, was very warm and sweet to the group and we felt comfortable asking questions and listening to the presented history. We consider the trip was definitely worth it and we recommend it with our whole heart.

Our tour guide Pilar was excellent! Very knowledgeable, nice, and made the tour experience great. Avila and Segovia are beautiful cities filled with history. Overall, a great experience that I would highly recommend

Even though we had inclement weather our tour guide Cristina was excellent at showing us the sites of Avila and Segovia. The tour were informational and enjoyable.

The tour of Avila and Segovia was informative and fun. Our guide, Pilar, was superb, a fount of historical data presented in an easy to assimilate. I recommend the tour to all!

Everything was nice. The trip was balanced with a high tempo but still enough time to see/embrace the sightings. Our guide Pillar was also excellent and gave advice also on other tours. Next time I visit Madrid i will go on another tour as I am very satisfied. The included tapa was not so good though, but that is my personal preference

This full day tour of Avila and Segovia is so worth it! Not only you’ll learn about it’s history but also enjoyed the food, the atmosphere and hospitality of people. Paco is the best tour guide! Hands down!!!! He’s very well-engaged, well-knowledgeable and clearly have a pure passion of what he does. Thank you Paco!

Enjoyed the trip. The second half afternoon to Segovia was much more interesting that the morning to Avila. Well run by the operator with excellent communication and coordination throughout the day.

Pilar was great. The tour was a bit long for our young children of 9 and 5 but they really enjoyed seeing the castles walls and alcazar

Such a good tour! We did another tour from the same company to Toledo yesterday and this one was SO much better. Pilar was very knowledgeable and switched between English and Spanish seamlessly. It was super nice to nap on the bus between destinations and there was a good amount of time spent in both locations. Thank you!!

My first time on a tour like this, going far away from the city (at least an hour to each stop) and seeing historical sites. It did not disappoint, and my jaw dropped several times when I first laid eyes on these giant cultural landmarks. Believe me, you can see as many photos as you want, but seeing them in real life was truly amazing. They provide everyone with audio receivers so you can hear what the guide is saying (as long as you stay relatively close), and our guide took care to go over his tour notes in both Spanish and English. My only small complaint is that he was also giving us some commentary on the bus between stops, but the bus speakers weren't loud enough to overcome the ambient bus noise, so I didn't really catch much of what he was saying. No worries, because the bus ride was so comfortable I took a quick nap on each ride anyway!

I was very fascinated with the city walls and the town of Avila. The town is vey quaint. Our guide did a great job of explaining things.

Such a great day. The country side was incredible, our guide was top notch. We were the only English only speaking folks on the tour and he did a great job balancing between Spanish and English. Even though it rained, we had a great experience!