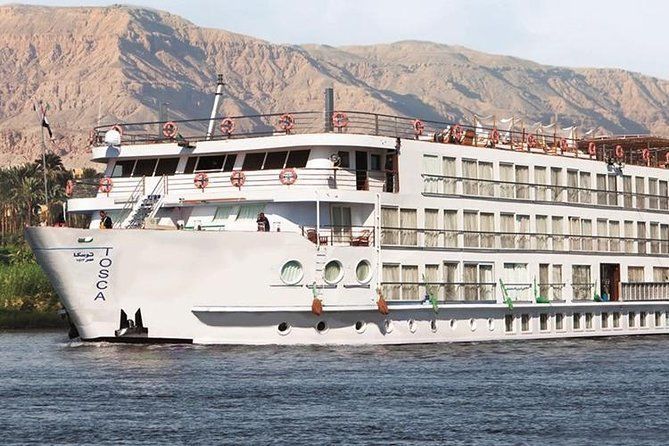 Enjoy 3 Nights /4 days Nile Cruise on Royal Princess , Starting from Aswan down to Luxorwith the visit to the Highlights of Egypt the High Dam, The Phila temple, Edfu and Kom ompo, Sailing on the Nile and Visit Luxor , The Valley of Kings Karnak temple and more Luxor And Aswan Attractions

Enjoy 3 Nights /4 days Nile Cruise on Royal Princess , Starting from Aswan down to Luxorwith the visit to the Highlights of Egypt the High Dam, The Phila temple, Edfu and Kom ompo, Sailing on the Nile and Visit Luxor , The Valley of Kings Karnak temple and more Luxor And Aswan Attractions

Embarkation& Lunch onboard of the Nile Cruise, proceed. Visits of Aswan including the temple of Philae and tour by Felucca around Elephantine, the High Dam, the Unfinished Obelisk

Built to honor the goddess Isis, this was the last temple built in the classical Egyptian style. Construction began around 690 BC, and it was one of the last outposts where the goddess was worshipped.

Aswan High Dam is a rock-fill dam located at the northern border between Egypt and Sudan. The dam is fed by the River Nile and the reservoir forms Lake Nasser. Construction for the project began in 1960 and was completed in 1968. It was officially inaugurated in 1971.

Aswan was the source of ancient Egypt’s finest granite, used to make statues and embellish temples, pyramids, and obelisks. The large unfinished obelisk in the Northern Quarries has provided valuable insight into how these monuments were created, although the full construction process is still not entirely clear. Three sides of the shaft, nearly 42m long, were completed except for the inscriptions. At 1168 tonnes, the completed obelisk would have been the single heaviest piece of stone the Egyptians ever fashioned.

Breakfast & Lunch on board the cruise.

Abu Simbel , It takes 3 hours driving to the temples of Abu Simbel before the heat of the day. The two temples were Carved out of the mountainside during the reign of Pharaoh Ramesses II in the 13th century BC,
Upon arrival, an Egyptologist guide will tell you all about one of the greatest and most whimsical pharaohs in Egyptian history. Marvel at the main façade of the Great Temple to Ramesses II and its 4 statues of the pharaoh seated on his throne following his advancing age.
In theory, the main temple is dedicated to Amon-Re Horakhty and Ptah, but in practice, it was constructed for the greater glory of its builder, Ramses the Great. Continue to the smaller temple of Ramesses' consort, Queen Nefertari, situated right next to the Great Temple. Admire the impressive rock-cut façade depicting the pharaoh and his queen.

Visit The temple of Kom ompo

The temple and the associated settlement site located 40 K.m north of Aswan, the temple was dedicated to the deities Sobek and Horus  and date mainly to the Ptolemaic and Roman period(332 B.b -395 A.c)

Sail to Edfu-Overnight in Edfu

Upper Egyptian site dominated by a large well -Preserved temple, dedicated  to the hawk-God Horus, The Construction of Ptolemaic temple of Horus,which was founded on the site of a much earlier temple, dates to the period between the reigns of Ptolemy the Third(246 B.c),The descriptions on the walls  include the Myth of contending of Horus and Seth(Probably performed annually as a religious Drama.

Sail to Luxor through Esna lock

Stop At: Luxor Temple, Luxor 23512 Egypt
Luxor Temple : The Temple of Luxor was the center of the most important festival, the festival of Opet. Built largely by Amenhotep III and Rameses II, the temple's purpose was as a setting for the rituals of the festival. The festival was to reconcile the human aspect of the ruler with the divine office.
Duration: 2 hours

The Valley of the Kings :

The final resting place of Egypt's rulers from the 18th to 20th dynasty, it is home to tombs including the great pharaoh Ramses II and boy pharaoh Tutankhamen.
he tombs were well stocked with all the material goods a ruler might need in the next world. Most of the decoration inside the tombs still well preserved.
Duration: 3 hours

Two massive stone statues of king Amenhotep III are the only remains of a complete mortuary temple.
Duration: 30 minutes

Stop At: Temple of Hatshepsut at Deir el Bahari, Kings Valley Rd Deir el-Bahari, Luxor 23512 Egypt
The Queen Hatshepsut temple :
Hatshepsut Temple:
It is one of the most beautiful & best preserved of all of the temples of Ancient Egypt. The temple was built on three levels with two wide ramps in a central position joining the levels together.

Stop At: Temple of Karnak, Karnak, Luxor Egypt
Karnak temple
Karnak Temple: No site in Egypt is more impressive than Karnak. It is the largest temple complex ever built by man, and represents the combined achievement of many generations of ancient builders and pharoahs. The Temple of Karnak is actually three main temples, smaller enclosed temples, and several outer temples situated on 247 acres of land.
Disembarkation after Breakfast
Duration: 2 hours

Meals included:
• Lunch
No accommodation included on this day.

Confirmation will be received at time of booking.
Wheelchair accessible.
Cruise: - Main dining room. - Lounge bar. - Sundeck where you can enjoy the swimming pool and jacuzzi. - Sip on your favorite drink at the shaded pool bar. - Equipped gym and massage therapist. - Pool table, chess, and playing card table. - Gift Shop. - Internet service in public areas. - Laundry service..
Note:.
Prices are quoted in Euro per person per trip and valid until 30th April 2019, except during Christmas, New Year & Easter holidays..
0 - 01.99 Free of Charge.
2 - 5.99 pay 25% of tour price.
6 - 11.99 pay 50% of tour price.
12+ pay full tour price as per adult person..
Reservations should be made as early as possible to book the desired Nile cruise, spaces will be secured upon receiving a deposit of 25 %, and during the Christmas and New Year holidays, the required deposit is 50%. This deposit forms part of your final payment. Deposits can only be made by credit cards, wire transfer and or the Western Union.
It is a customary attitude for expressing ones satisfaction with good services rendered to him by staff on duty with him. We advise if you are willing to offer it, this would be great and if not, you are not obliged to do it..
Not recommended for travelers with back problems.
Not recommended for pregnant travelers.
No heart problems or other serious medical conditions.
Most travelers can participate.
This is a private tour/activity. Only your group will participate.
Face masks required for travelers in public areas.
Face masks required for guides in public areas.
Face masks provided for travelers.
Hand sanitizer available to travelers and staff.
Social distancing enforced throughout experience.
Regularly sanitized high-traffic areas.
Gear/equipment sanitized between use.
Transportation vehicles regularly sanitized.
Guides required to regularly wash hands.
Regular temperature checks for staff.
Temperature checks for travelers upon arrival.
Paid stay-at-home policy for staff with symptoms.
Contactless payments for gratuities and add-ons