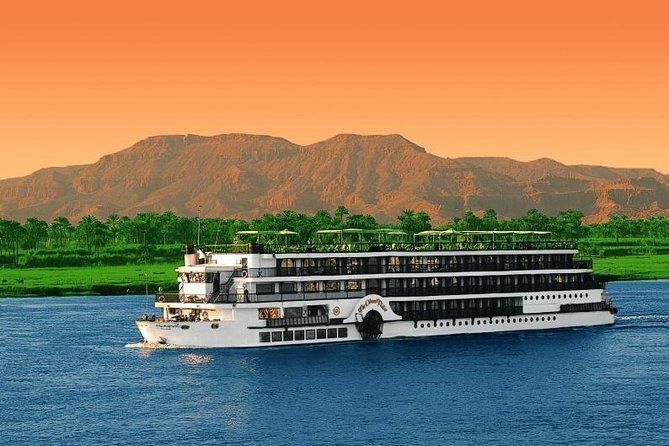 An amazing Nile Cruise touring 5 stars full board holiday starting from Luxor to Aswan discover the ancient temples and tombs Visit Philae Temple, High dam, the Karnak Temple, Valley of the Kings, Queens and Hatshepsut Temple at the West Bank of the Nile.

An amazing Nile Cruise touring 5 stars full board holiday starting from Luxor to Aswan discover the ancient temples and tombs Visit Philae Temple, High dam, the Karnak Temple, Valley of the Kings, Queens and Hatshepsut Temple at the West Bank of the Nile.

Drove up to the Aswan High Dam. The width at the top of the dam is 40 meters, but the base is a full kilometer wide (980 meters). There are 12 turbines in the dam and these produce most of the power requirements for Egypt.The dam backs up the largest man-made lake in the world, Lake Nasser. The dam was a joint project between Russia and Egypt with Russia supplying the engineers. A monument to the joint effort is located on the road to the dam. Eight ancient temples had to be rescued from the rising waters of Lake Nasser. Very impressive sight.

The enormous Luxor Temple was one of the great constructions of the New Kingdom (dating from the 14th century BC) dedicated to the god Amun. It was known as the “Southern Sanctuary” and was the site of ceremonies aimed at encouraging the life-giving Nile floods. Once through the processional Avenue of Sphinxes you come to the First Pylon, which announces the phenomenal scale of the stonework here: statues, columns and obelisks all compete with each other in a race to the sky. Ensuing civilizations have also left their marks: there’s a shrine erected by Alexander the Great, Roman wall frescoes as well as a 14th century AD mosque, ensuring this remains a place of worship in the present day.

for a period of nearly 500 years from the 16th to 11th century BC, rock cut tombs were excavated for the Pharaohs and powerful nobles of the New Kingdom (the Eighteenth to the Twentieth Dynasties of Ancient Egypt). The valley stands on the west bank of the Nile, opposite Thebes (modern Luxor), within the heart of the Theban Necropolis.The wadi consists of two valleys, East Valley (where the majority of the royal tombs are situated) and West Valley.

The Karnak Temple is and was the largest religious complex in the world. Visit this facility like you've never seen before. Learn secrets and myths that reign around the temple. See parts of the plant you have never seen before. Chons part, the Amun area as well as Sechmet, the red Kappele of Hatshepsut and much more.

Stop At: Valley of the Queens, Luxor Egypt

Hidden in a Y-shaped ravine on the West Bank of the Nile, the Valley of the Queens is an ancient burial site where the wives of the reigning Pharaohs from the 18th, 19th, and 20th dynasties were buried. The valley not only contains the tombs of the royal wives and children from this time, but is also home to a number of other tombs of members of the royal families, including princesses and princes. The most famous tomb at the site is that of Queen Nefertari, which is only occasionally open to visitors. Widely considered to be the finest in the whole of Egypt, the tomb of Nefertari has been completely restored but is nevertheless closed more often than not. Nefertari was one of the five wives of Ramses II, and the tomb he built for his favourite queen is a grand shrine to her beauty and a testament of his love for her. Among its ornate decoration it features colorful scenes upon its chamber walls and golden stars adorning the ceiling.

is considered the closest Egypt came to classical architecture. Representative of New Kingdom funerary architecture, it both aggrandizes the pharaoh and includes sanctuaries to honor the gods relevant to her afterlife.

Philae is an island in the reservoir of the Aswan Low Dam, downstream of the Aswan Dam and Lake Nasser, Egypt. Philae was originally located near the expansive First Cataract of the Nile in Upper Egypt and was the site of an Egyptian temple complex.
Philae in Greek or Pilak in ancient Egyptian, meaning ‘the end,’ defined the southern most limit of Egypt. It was begun by Ptolemy II and completed by the Roman Emperors.

Built as royal tombs, the Great Temple of Ramses II and the Temple of Hathor are some of Egypt’s best known archeological sites. Step past the enormous sandstone statues carved into the temple facades, and explore the interiors, which are decorated with art and hieroglyphics.

Kom Ombo dates from the Ptolomaic Dynasty and it was only completed under Roman rule. The temple has a dual dedicatation to Sobek, as well as Horus, and the plan of the temple reflects this dual purpose.

The Temple of Horus (at Edfu), built as homage to the falcon-headed god Horus, was erected between 237 and 57 BC, during the reign of six different Ptolemies. It’s the second-largest temple in Egypt, only after Karnak, and its main building includes a number of marginally preserved reliefs.

Confirmation will be received at time of booking.
Wheelchair accessible.
Passport name, number, expiry and country is required at time of booking for all participants.
Children must be accompanied by an adult.
Vegetarian option is available, please advise at time of booking if required.
Arrival train tickets or flight details should sent to us before your arrive to arrange pick up service ..
This is a private tour/activity. Only your group will participate