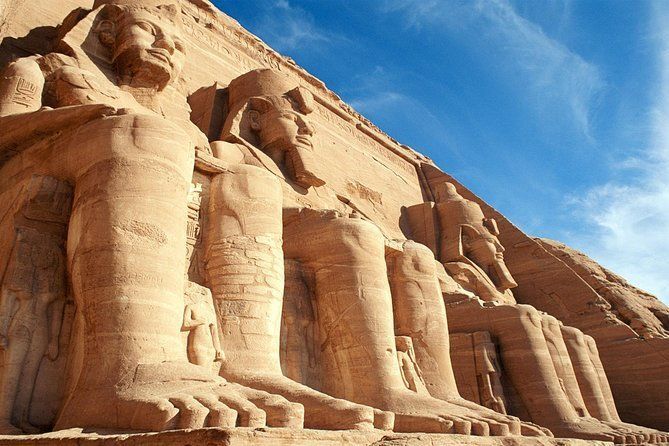 Pay a visit to the highlights of Egypt from Hurghada! You will visit the most famous historical sights in Cairo, Aswan, and Luxor. Five-star accommodations, entrance fees and private guidance are included.

Pay a visit to the highlights of Egypt from Hurghada! You will visit the most famous historical sights in Cairo, Aswan, and Luxor. Five-star accommodations, entrance fees and private guidance are included.

You will be transferred from your hotel to Hurghada airport for flight to Cairo where you will be met by your private guide to discover Giza Pyramids:

The most substantial ancient structure in the world and the most mysterious. They were built over the span of three generations – by Khufu, his second reigning son Khafre, and his grandson Menkaure during the 4th dynasty (2575 to 2465 BC)

Then move to the Great Sphinx:

Finish your tour by The Valley Temple:

The only remaining mortuary temple at Giza plateau, made out of red granite and it was used for the embalming process.

Evening time, we will transfer you back to Cairo airport to catch your flight to Aswan for overnight at 5* hotel / Cruise.

Pick up from your hotel in Aswan to enjoy Abu Simbel by a private air-conditioned vehicle.

The two Temples of Abu Simbel, with their unique style, are considered to be the masterpieces of ancient Egypt. They reflect the glory and grandeur of the new Kingdom.

The great Abu Simbel temple is also called The Sun Temple of Ramsses II.The Temple of Queen Nefertari is also Called Temple of Hathor who was the wife of the Sun God so in a symbolic way.

Upon arrival back to Aswan, you will have your lunch and catch the 1st class train to Luxor for overnight.

After breakfast, you will be met by your tour  guide and a private air-conditioned vehicle to visit:

Valley of the Kings

The final resting place of Egypt's rulers from the 18th to 20th dynasty, the Valley of the Kings is home to tombs including the great pharaoh Ramses II and boy pharaoh Tutankhamun. You will have the chance to visit 3 tombs for free excluding the tomb of King Tutankhamun as it has extra ticket.

The queen who would-be king, Hatshepsut was a ruler loved by her people but always surrounded in controversy. See her spectacular temple in Luxor's West Bank, one of the best preserved of its kind.

A remains of a complete mortuary temple but its completely destroyed except for those Statues.

Lunch will be served at a Nile view restaurant then move to the East bank of Luxor to Enjoy Karnak Temples:

No site in Egypt is more impressive than Karnak. It is the largest temple complex ever built by man, and represents the combined achievement of many generations of ancient builders and pharaohs. The Temple of Karnak is actually three main temples, smaller enclosed temples, and several outer temples situated on 247 acres of land.

Your tour also includes a fellucca trip in the Nile River. Then we drive you back to your hotel in Hurghada.

Our tour is run by the tour operator Egypt tours. The travel and hotel (especially Steigenberger Nile Palace, Luxor) arrangements were good. We skipped Cairo. The visit to Abu Simbel temples required three hours by car starting early in the morning at Aswan, an hour at the temple, another three hours back to Aswan, followed by train to Luxor after lunch. While this part of the visit cannot be made better, it left us thinking if it was necessary to travel an entire day for just an hour of sight seeing that day. At Luxor, the Valley of Kings, Hatshepsut temple and the Karnak temple are definitely worth visiting. Our guide at Luxor, Mohammed Hassan also gave a very detailed and intersting description of each of the attractions. I would recommend him for an English speaking guide. Egypt tours made sure all arrangements were made in advance. For any requirements/enquiries, it is easier to call Egypt tours by phone directly instead of Viator helpline, even though Viator have a very helpful call center staff.

I absolutely loved this trip! The tour guides were very organized and informative! I learned a lot thank you!