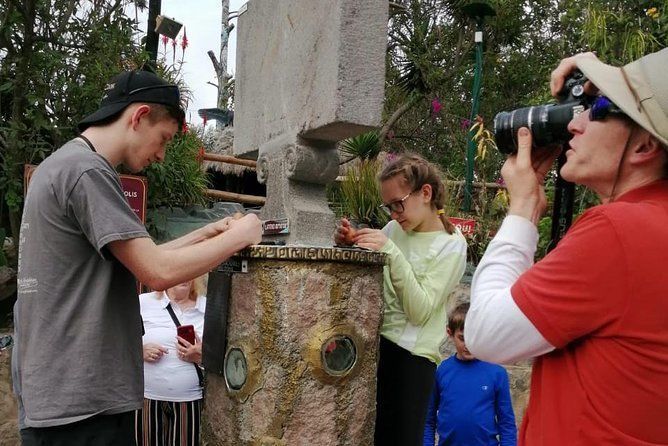 Discover the highlights of Quito in this 3 day cultural tour to visit the Old District of the city. Enjoy of the experiments that only offers the Inti Ñan Museum in the Equator Line. Experience the culinary of the Andes with a professional chef. Visit La Capilla del Hombre which is a purpose-built art museum dedicated to the peoples of Latin America. Enjoy of magnifient views from teleférico of Quito over 13,200 feet and explore fruits and vegetables local markets.

Discover the highlights of Quito in this 3 day cultural tour to visit the Old District of the city. Enjoy of the experiments that only offers the Inti Ñan Museum in the Equator Line. Experience the culinary of the Andes with a professional chef. Visit La Capilla del Hombre which is a purpose-built art museum dedicated to the peoples of Latin America. Enjoy of magnifient views from teleférico of Quito over 13,200 feet and explore fruits and vegetables local markets.

Stop At: Quito Old Town, Quito Ecuador
Experience the sights, smells, and flavors of this sky-high capital as the day comes to life. Start this adventure on the cobblestone streets of the city to visit: The Mercado Central, a vibrant and colorful market to immerse yourself in the bustling atmosphere; follow your guide past stalls bursting with exotic fruits and fresh vegetables and discover sizzling local dishes. Visit the Independence Plaza, home to the Independence Monument, Government Palace, and the Archbishop’s Palace. La Compañía de Jesús church, a Jesuit church boasting an elaborate façade made entirely out of volcanic stone, and an interior rich in gold leaf. The legendary  San Francisco Catholic  Church to explore convents and monastery, then walk down through Rocafuerte Street, which in the Seventeen Century was known as “the long Street to the hill”.  Explore La Ronda, one of the most picturesque cobblestone streets in Old District of Quito. Try flavors that you’re not likely to find back home — like colaciones, empanadas, etc...  Stop in a chocolatería to taste and have a full explanation of the whole process of making chocolate.  After 4 hours of city exploration by walking, be ready to take cooking lessons with a professional cook.
Duration: 6 hours

Stop At: La Capilla Del Hombre, E18-94 Mariano Calvache St. And Lorenzo Chavez St Barrio Bellavista, Quito 170150 Ecuador
One of the most important works of art in South America, Ecuadorian artist Oswaldo Guayasamín’s Capilla del Hombre stands next to the Casa Museo Guayasamín. The fruit of Guayasamín’s greatest vision, this giant monument-cum-museum is a tribute to humankind, to the suffering of Latin America’s indigenous poor and to the undying hope for something better. It’s a moving place and tours (in English, French, and Spanish, included in the price) are highly recommended. Admission includes entrance to the Casa Museo.
Duration: 30 minutes

Stop At: National Museum of Ecuador, Avenida Patria Between Avenida 6 de Diciembre and Avenida 12 de Octubre, Quito 170150 Ecuador
Located in the circular, glass-plated, landmark building of the Casa de la Cultura is one of the country’s largest collections of Ecuadorian art, with magnificent works of pre-Hispanic and colonial religious art. The museum collection includes more than 1000 ceramic pieces dating from 12,000 BC to AD 1534, with highlights being ‘whistle bottles’ from the Chorrera culture, figures showing skull deformation practiced by the Machalilla culture, wild serpent bowls from the Jama-Coaque and ceramic representations of tzantzas (shrunken heads).
Duration: 30 minutes

Stop At: Museo de la Ciudad, Garcia Moreno 572 y Rocafuerte, Quito 170150 Ecuador
This first-rate museum depicts daily life in Quito through the centuries, with displays including dioramas, model indigenous homes, and colonial kitchens. The 1563 building itself (a former hospital) is a work of art. There are also a number of temporary exhibitions.
Duration: 45 minutes

Stop At: Museo Manuela Saenz, Barrio San Marcos, Centro Historico, Quito Ecuador
Manuela Saenz Museum, located in Quito, seeks for the rescue of a forgotten, lost and underestimated side in the history of Independence of the Spanish in what now is the Ecuadorian territory.
Duration: 30 minutes

Stop At: Mitad Del Mundo, Avenida Manuel Cordova Galarza KM. 13/5, San Antonio de Pichincha, Quito 170180 Ecuador
The Mitad del Mundo ("Middle of the World") complex just outside Quito is heavily promoted as being "the equator". In fact, it is a tourist trap built around a monument to an expedition which located the equatorial line with impressive accuracy for the time (the 18th Century) but which later technology has revealed to be about 240m off the mark.
Duration: 2 hours

Stop At: TeleferiQo Teleferico Quito, Fulgencio Araujo Av. Occidental, Quito 170150 Ecuador
For spectacular views over Quito’s mountainous landscape, hop aboard this sky tram, one of the world's highest aerial lifts, that takes passengers on a 2.5km ride (10 minutes) up the flanks of Volcán Pichincha to the top of Cruz Loma. Once you’re at the top (a mere 4100m), you can hike to the summit of Rucu Pichincha (4680m), a 4km (five-hour) round-trip – ask about the safety situation before attempting the climb and bring warm clothes.
Duration: 1 hour