The tour lasts for one fantastic hour and is offered in both German and English.

The tour lasts for one fantastic hour and is offered in both German and English. 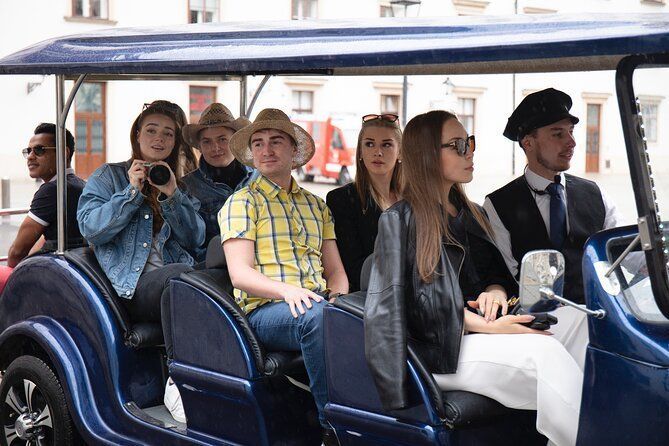 The Hofburg was from the 13th Century to 1918 the residence of the Habsburgs. Since the end of 1946, it has been the official seat of the Austrian Federal Presi- dent.

Was built from 1874 to 1883 according to a design by Theophil von Hansen for the Reichsrat of the kingdoms and states represented in the Reichsrat, now also called Old Austria; the architect was oriented towards ancient Greek architec- ture.

Opened in 1888, It is considered one of the most important stages in Europe, After this was completely burned out in 1945 as a result of bombing attacks, reopening on the 14th. October 1955, in 1944, the Burgtheater also had to be closed due to the arranged general theater closure. From 1. April 1945, when the Red Army approached Vienna, a military unit was stored in the house, part was used as a weapons warehouse.

The Vienna City Hall was built from 1872 to 1883 and is one of many historic build- ings that were built along the Ringstraße at that time. The town hall facade is an outstanding example of a civil extension of neo-Gothic. The exterior, especially the 98 m high tower On the top stands the town hall man, a 5.4 m high, With the statue and its base, the tower is 103.3 m high and is therefore one of the tallest buildings in Vienna.

One of the most important neo-Gothic sacred buildings in the world, with a height of 99 meters, the Votivkirche is the second highest church in Vienna. The church was to be built as a votive gift (thank you) of the peoples of the monarchy for the salva- tion of Franz Joseph.

Italian National Church Maria Schnee) is a Roman Catholic Hall Church, It was one of the first Gothic churches in eastern Austria. A mosaic copy of Leonardo da Vinci's Last Supper also came to the church. It had been commissioned by Napoleon from Giacomo Raffaelli.

The 1,709-seat Renaissance Revival venue was the first major building on the Vienna Ring Road. It was built from 1861 to 1869 . The building is also the home of the Vienna State Ballet, and it hosts the annual Vienna Opera Ball during the carnival season.

The museum is housed in the Palais Erzherzog Albrecht, a historic residence of the Habsburgs. The name Albertina refers to Albert Casimir Duke of Saxe-Cieszyn, son-in-law of Empress Maria Theresa, who founded the collection in Bratislava in 1776, where he resided as a representative of Maria Theresa for the Kingdom of Hungary.

Is a Roman Catholic church in the 4th century. Karlskirche are accessible via a panoramic elevator, s it’s one of the most important baroque church buildings north of the Alps and one of the symbols of Vienna

The square bears its name about 1850 after the parish church of St. Michael, n 1927, the first roundabout in Vienna was established on Michaelerplatz. The center of Michaelerplatz has been determined since 1991 by exposed archaeological excavations.

Pass By: Am Hof, Vienna Austria

Is one of the historically most important squares in downtown Vienna, The square Am Hof was already part of the Roman army camp Vindobona and was uninhabit- ed in the early Middle Ages. The most remarkable building is Kirche am Hof the church at the court, to the nine choirs of the angels.

Between 1386 and 1403, the Carmelites built a three-nave Gothic hall church instead of the previous Romanesque court chapel. As builders of the church, Lucas Schwendtner from Magdeburg, Andreas the cellar master and builders with the white brothers at the court, maths of the Helbling, master Simon the stonemason are handed down. Andreas the cellar master is described by Perger/Brauneis more closely than Andreas Schuestl from the Petersfreythof.

Is one of the oldest churches in Vienna, Austria, and also one of its few remaining Romanesque buildings. Dedicated to the Archangel Michael. The Church is famous for its Michaelergruft, a large crypt located underneath the church.

Establishment 1368 (as imperial court library) Stock 12,229,285, of which over 3.9 million are books As a national library, it collects, among other things, the compul- sory copies of all printed works published or produced in Austria.

In the 19th century, most of the area of today's Schwarzenbergplatz was occupied by the Glacis in front of the Vienna city wall. Emperor Franz Joseph I decided to have a monument to the general Karl Philipp Schwarzenberg, who was victorious in the Battle of Leipzig in 1813.

Is a state art academy in Vienna and one of the oldest art academies in Europe. Was founded in 1692, as a private academy modelled on the Accademia di San Luca and the Parisien Académie de peinture et de sculpture by the court-painter Peter Strudel.

The Mozart monument in honor of the composer Wolfgang Amadeus Mozart (1756–1791) in Vienna has been located in the Burggarten in the 1st century since 1953. Inner City District. The monument is located directly at the entrance opposite Eschenbachgasse and can be seen well from the Burgring.

The 7.5 meter high monument was created by the architect Karl König (1841–1915) and the sculptor Viktor Tilgner (1844–1896) and on the 21st April 1896,[1] five days after Tilgner's death, unveiled on Albrechtsplatz (today Albertinaplatz). Viktor Tilgner's signature was supplemented by the date of death of the artist.

The Kunsthistorisches Museum (KHM) is an art museum in the Austrian capital Vienna. It is one of the largest and most important museums in the world. It was opened in 1891 and in 2018 from approx. 1.75 million people visited.

The NHM Vienna is one of the largest museums and non-university research institutions in Austria and an important center of excellence for all matters relating to natural sciences. The museum's 39 exhibition rooms cover 8,460 square meters and present more than 100,000 objects. It is home to 30 million objects available to more than 60 scientists and numerous guest researchers who carry out basic research in a wide range of topics related to human sciences, earth sciences, and life sciences.

The hero monument of the Red Army (also Russian monument, liberation monument, victory monument, but also pea monument) on Wiener Schwarzenbergplatz was built in 1945 in memory of around 17,000 soldiers of the Red Army who died at the Battle of Vienna towards the end of the Second World War.

The MuseumsQuartier, MQ for short, is an area in the 7th century. Vienna municipal district, new building, near the center of the city. The offer ranges from visual and performing arts, architecture, music, fashion, theater, dance, literature and children's culture to the new media. At the time of its completion, it was the eighth largest cultural area in the world. Prominent components are the Mumok, the Leopold Museum and the Kunsthalle Wien.

The Volksgarten is located on an area where previously there were primarily fortifications. From 1596 to 1597, a kurdine was built on the eastern side of today's park, on the southern 1639 the castle hill. This was blown up by the French in 1809 and later removed.

The Wiener Musikverein (or the Haus des Wiener Musikvereins) is a concert hall rich in tradition in Vienna. In this house you will find the famous Great (Golden) Musikvereinssaal, which is considered one of the most beautiful and acoustically best halls in the world. The Musikverein is located in the 1st Vienna municipal district, inner city, on Musikvereinsplatz.

The Albertina modern is a museum of contemporary art, which was the second location of the Viennese Albertina on the 27th. May 2020 at theKünstlerhaus Vienna. With over 60,000 works by 5,000 artists, it is one of the great museums for contemporary art.

Confirmation will be received at time of booking.
Not wheelchair accessible.
Service animals allowed.
Near public transportation.
Most travelers can participate.
This experience requires a minimum number of travelers. If it’s canceled because the minimum isn’t met, you’ll be offered a different date/experience or a full refund.
This tour/activity will have a maximum of 7 travelers.
Hand sanitizer available to travelers and staff.
Transportation vehicles regularly sanitized.
Guides required to regularly wash hands.
Regular temperature checks for staff.
Contactless payments for gratuities and add-ons

THIS COMPANY IS INCOMPETENT AND THEY DISCRIMINATE AGAINST SINGLE PEOPLE, TRIPADVISOR ALSO DISCRIMINATE. I purchased my tickets a couple weeks before traveling, and i never received any communication from the operator or Tripadvisor. So on day of tour i walked over to the specified meeting location, looked and looked , asked and asked,(even walked to the places featured on the website photos), never did i find the car or person/s belonging to this company, after two hours of doing this in the cold Vienna weather i gave up and called Tripadvisor only to find out that they had cancelled the whole day and didn’t bother to notify me, but they told Tripadvisor that i could return the following day and that they would honor my ticket. On this occasion i asked my concierge to call and ask if they were operating services, only to find out that because i was SOLO that they couldn’t accommodate me,and knowing that i was alone they said that i could purchase two tickets and then they would give the tour.

Our driver Elvis was extremely knowledgeable about Vienna history. He ensured that our ride was comfortable. He was very pleasant and had a great sense of humor. I highly recommend this tour

Our driver Elvis was extremely knowledgeable about Vienna history. He ensured that our ride was comfortable. He was very pleasant and had a great sense of humor. I highly recommend this tour

Thank you so much for this amazing tour We saw all of the main buildings and plus the city centre so much information and so many facts that was extraordinary.

Thank you so much for this amazing tour, It was not the first time we visit Vienna but This Tour show me a completely different picture, so much information and plus life guide was amazing Will recommend it to my friends.